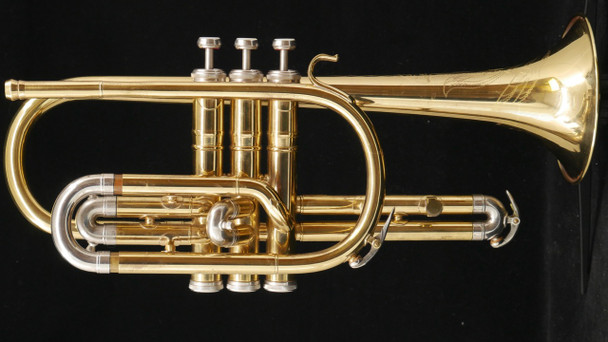 Conn has made a TON of cornet models through the years, and this one is super rare! The 34A was only produced for about one year in 1953-54. The design of this horn is all brass with nickel trim. Check out the angles on the knuckle pipe from the tuning slide into the valve block! This cornet also has a tall valve block with bottom sprung valves. This is a fun horn to play and it has a nice tone. Valve compression is good with a thicker oil like Berp #3.

At first I thought these were 12A Coprion's with a brass bell. Essentially a 112A (see separate listing). But I have received proof that this is in fact called a 34A: a picture of the underside of the mouthpiece receiver with "34A" clearly stamped on it. As far as I can tell at this point these were only produced for a short period in 1953 and 1954. The 34A doesn't appear in either the 1950 or the 1955 catalogs, but it is in the 1954 catalog. Occasionally you see what appears to be a 12A with a red brass bell, as opposed to a Coprion bell. The models of those I have seen are engraved "12A" on the bell, so are classified as "12A" and not "34A". At first circumstantial evidence suggested the 34A was called the "Symphony Grand", but the 1954 catalog lists it as the "Concert Special". It has a #1½ (0.458") bore.

I have learned that the third slide, without the finger ring to adjust the pitch of a low D and C#, is slightly longer than it is on modern instruments. On modern instruments the low Eb is in tune, but the low D and C# are quite sharp. On these older cornets with the longer third slide and no finger ring the Eb is a bit flat and the D and C# are slightly sharp, but not as sharp as they are on later instruments. It was thought that the slightly flat Eb and slightly sharp D and C# were within the abilities of the player to lip into tune.

What Conn said in 1954:
One of the finest conventional style cornets available... preferred by many players for its "band sound" and perfect balance. Clickless Crysteel valves. Brass, nickel trim finish.

MSRP:
Now: $225.00
Was:
Fantastic new bags in stock now! In addition to incredible protection, these bags are well-made, sustainably crafted, and the workers are paid a living wage. Doesn't get much better than...

MSRP:
Now: $100.00
Was:
These bucket mutes from Trumcor are amazing! They sit on the bell with 3 padded hooks. They play great and look great too!     From Trumcor:   The Trumpet Bucket Mute is a...

MSRP:
Now: $20.00
Was:
Made from genuine water buffalo leather, these fantastic mouthpiece pouches from Gard feature the ACB logo! Gard Bags is one of our favorite companies because of the excellent quality of their...

Pre-Owned Yamaha YCR-2330II Cornet in Lacquer! Made in Japan

MSRP:
Now: $399.99
Was:
These Japanese-made Yamaha 2330 cornets are a great way to get into cornet playing. They're a great value for the money! This is a pre-owned horn with some signs of use and repair. The brace has been...

MSRP:
Now: $249.99
Was:
Here's a King Master cornet from the around 1939-40 with the innovative "underslung" wrap design! This cornet has some signs of use: there is some lacquer wear in several places, as well as several...

MSRP:
Now: $549.00
Was:
Used Reynolds Cornet Manufactured in Cleveland, Ohio in the early 1950s. This cornet is in raw brass and is beginning to develop a nice, even patina. Features: - King Master-style underslung wrap...

MSRP:
Now: $299.99
Was:
Another vintage cornet for sale here at ACB!   This is an Olds Ambassador cornet from the mid 1970's. It has been professionally cleaned here at the shop, and we replaced the felts and corks...