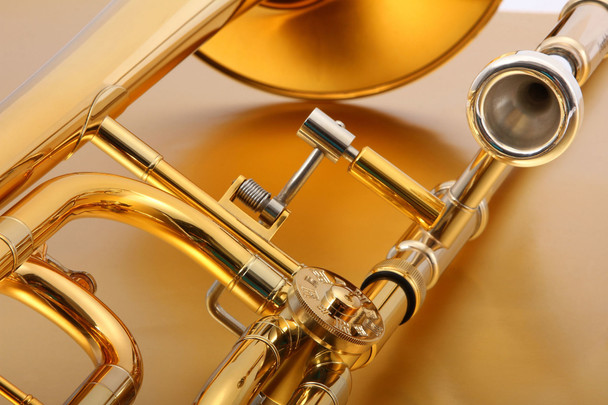 The JP332 Rath represents John Packer's flagship Bb/F large bore tenor trombone designed and manufactured in collaboration with Michael Rath, one of the UK's leading trombone specialists. With an unparalleled level of craftsmanship, the JP332 Rath is the result of many years of development and features some exclusive components that players won't find on other instruments. A custom designed Rath leadpipe was created especially for the JP332 Rath which gives excellent response in all registers whilst retaining support for inexperienced players. The instrument also features an ergonomic thumb lever which is easy to adjust for smaller hands. The open-wrap design and counterweight ensure optimum balance and a free blowing low range.

The JP Rath range of trombones have generated a lot of positive comments throughout the industry and are now in demand across the globe. They are characterized by a professional standard of workmanship and a high level of performance. Often compared with professional models, they compare very favorably with instrument from some of the top makers. The JP332 Rath features a large bore (.547") providing players power and projection in symphonic works while its 8.5" bell gives even greater sound projection that its smaller brother, the JP331 Rath. High grade 80:20 (yellow) brass is used in construction throughout.

** Be sure to also check out our ACB Trombone Mouthpieces by clicking HERE!

It was very clear from first blowing the JP332 Rath trombone that it had a very clear, vibrant and open sound.  An exciting colour of sounds throughout the register and a real and rare treat being so open in the trigger register.

The most important value is that the JP332 Rath is not out of place among other model trombones within the section, being very easy to blend with.

A very fine model of trombone, perfect for players in whatever field of ensemble. An extremely true and fine blowing trombone suitable for all.

MSRP: $2,000.00
Now: $1,599.99
Was: $2,000.00
Amazing new professional trombone from my friends at Brasspire! The Brasspire Unicorn 206 Tenor Trombone is a wonderful and affordable option for any trombonist, novice to professional, to step into...

MSRP:
Now: $185.00
Was:
Austin Custom Brass Standard Series Trombone Mouthpieces    ACB Trombone mouthpieces are designed and made here in the US with the highest standards of manufacturing possible. Get AHEAD...

MSRP: $2,995.00
Now: $2,260.00
Was: $2,995.00
The versatile Schagerl James Morrison Trombone Schagerl trombones are distinctive, powerful, and have become the standard of sound many ensembles desire from big band, to symphony orchestra. Their...

MSRP: $2,000.00
Now: $1,599.99
Was: $2,000.00
Amazing new professional trombone from my friends at Brasspire! The Brasspire Unicorn 206 Tenor Trombone is a wonderful and affordable option for any trombonist, novice to professional, to step into...

MSRP: $1,616.00
Now: $1,131.00
Was:
The JP230 Rath Bb Trombone is the collaborative result of Michael Rath's famed craftsmanship and John Packer's respected range of brass and woodwind. The JP Rath trombones have...