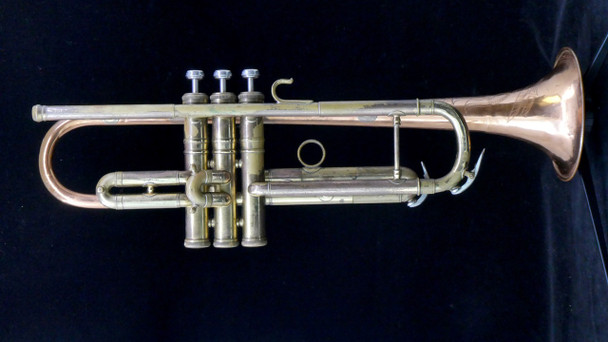 Here's another Conn trumpet we have in the shop, the 12B! This trumpet was built around 1949-50 and features a Coprion bell. This trumpet has fairly extensive lacquer wear, but between the aged lacquer and the patina of the raw brass portions it has an authentic vintage look. Valve plating is in good shape, although as with many vintage horns you may prefer to use a thicker oil like Berp No. 3. This horn has the stylish Conn braces and long mouthpiece receiver, bottom sprung valves, and bell engraving. There are various small dents and dings around the instrument, some bending at the bell bow, and some damage and creasing at the bell flare. There may be some small points of redrot developing on the tuning slide. The pinky hook is slightly off center. Please check out the photos to see the condition of the horn.

Notice the Coprion bell. The 12B is the coprion version of the venerable 22B. The coprion bell improves projection and darkens the sound somewhat. The dark color of the Coprion bell is due to the fact that (original) Lustre-Conn finish tends to darken somewhat with age. As far as I know this darkening of the lacquer has no effect on the sound. Also notice that the third slide finger ring on this instrument is fixed, not adjustable. This is normal for Conn trumpets before the 1950's. Starting in the 1950's new models, both student and professional, had adjustable third slide finger rings.

Full disclosure: The main tuning slide stop rod in this picture is absolutely correct for this instrument. However, the stop rod seen here is in fact a combination of parts from two different instruments.

When it first came out the 12B was apparently featured by the entire trumpet section of the Jimmy Lunceford orchestra. I also read that Bunny Berigan used it for the sound track of the 1942 movie "Syncopation".

There is a question as to the year in which production of the 12B started. The Conn trumpet model number index on R. Jones' website indicates 1938. Conn documentation says the Coprion process was invented in 1938. I have come into possession of a Conn trumpets and cornets brochure dated April 1938; it doesn't list the 12B. All this suggests a start date for the 12B of 1938. Nevertheless, 12B's with a 1937 serial number appear regularly. I have developed the following theory about that: Conn, in my experience, had the habit of producing large numbers of a new model during the year in which it first became available (for example: ever notice how many of the 10B Victors you see around are 1956 models?). Since the 12B is essentially a 22B New York Symphony with a Coprion bell, it isn't unreasonable to assume that in 1938 Conn used partially assembled 22B's it had, with 1937 serial numbers, and added a Coprion bell to make a 12B. It would be interesting to see if these 1937 12B's have "2 2 B" stamped underneath the mouthpiece receiver, which would confirm this theory. If true, this might also explain why the Conn trumpet model number index on R. Jones' website incorrectly lists the 12B as the "New York Symphony".

What Conn said in 1939:
Built in small bore, but the seamless bell of Coprion gives it the power you would expect only from larger bore. Ease of playing, beauty of tone, accuracy of scale and amazing flexibility. Impossible to overblow or crack a note. Patented Clickless Crysteel valves. Bb and A. Brass, heavily clear lacquered.

Sold with no case or mouthpiece

MSRP:
Now: $749.99
Was:
The Conn 40A long model cornet has an artistic, Art Deco design concept. Every part of the horn incorporates Art Deco details, from the mouthpiece receiver to the rimless bell. One key difference...

MSRP:
Now: $1,199.99
Was:
Here's a nice-playing Conn 60B in silver plate! Made in Elkhart, Indiana in 1969, shortly before production moved to Abilene, Texas. There are a few spots of wear and repair. There's a small dent in...

MSRP:
Now: $549.99
Was:
I always have these in stock and right now have a great 1923 Holton Revelation with nickel silver balusters in raw brass! (see pics).   I have had many of these in stock (I always...