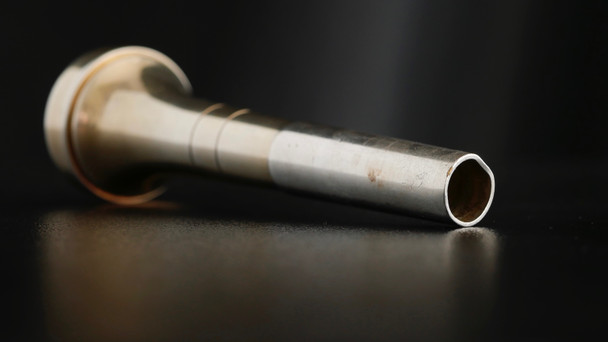 Here's a nice-playing Conn 60B in silver plate! Made in Elkhart, Indiana in 1969, shortly before production moved to Abilene, Texas. There are a few spots of wear and repair. There's a small dent in the mouthpiece receiver and a dent in the leadpipe. The bottom tuning slide leg ferrule has been replaced. It looks like a small dent has been removed from the knuckle joint into the third valve. There's a small ding near the bell tail ferrule and a dent under the bend. The full length of the bell has been reworked, it has a slight bend down and in. There has been a crease removed from the bell. Overall the plating is in good condition, with some scratching along the outside length of the bell and on the bottom leg of the third valve slide. Valves and slides all work smoothly and compression is very good for the age of the horn. The 60B is a desirable horn from the Connstellation series and the late Elkhart period is a great era for Conn trumpets.

Not the most imaginative name. It really is called the "Sixty-B". In 1967 Conn started to produce the 60B, and it lasted at least through 1972. It had a #1½ bore (0.458") and top spring valves. It was available in standard brass and with a "bright silver finish". I am told that the 60B was play tested for Conn by Buddy Childers and Gene Goe.

I have been contacted by a gentleman by the name of Bill Bracker who was an Inspection Supervisor for Conn at the time. He tells me the official name for the 60B was "Super Connstellation". One of Conn's clinicians at the time, the trumpet player Jerry Franks, was responsible for the design of the 60B and had the very first 60B prototype. Mr. Bracker tells me that the first production run of 60B's could not be sold as first line production; they were sold as seconds. The problem in production was easily fixed for the second production run.

MSRP:
Now: $76.95
Was:
Soulo Mute With its distinct soulful sound, perfect pitch and lack of back pressure, Soulo has come to be essential for every pro brass player's mute arsenal. Its versatility, ease of use and sleek...

MSRP: $250.00
Now: $200.00
Was:
Introducing El GATO: The Cat Anderson Replica Series mouthpiece!   For years and years one of the things I've always wanted to do here at ACB is to re-launch classic trumpet mouthpieces...

MSRP: $39.99
Now: $29.99
Was:
One of the most popular brands for a reason - very stable, easily transportable, and safe with almost all horns. The 5 leg version offers more support and stability than the 3 leg version, we use it...

MSRP:
Now: $40.00
Was:
All 4 color options are in stock and able to ship the same business day (if the order is placed before 3PM CST!)   Wow! These practice mutes from Divitt Trumpets are phenomenal! Very free...

MSRP:
Now: $4,335.00
Was:
We're thrilled to be official dealers of the incredible Edwards X-13 Trumpet! If you're looking for an incredible trumpet for lead or commercial playing, check out the Edwards X-13! This horn is in...

Böhme Tumultus Trumpet: Build Your Own!

MSRP:
Now: $3,861.00
Was:
The Böhme Tumultus model is an incredibly responsive trumpet that will give you clear feedback behind the horn. Intonation is excellent, and slotting feels secure without being restrictive...

MSRP:
Now: $799.99
Was:
Here's another Conn trumpet we have in the shop, the 12B! This trumpet was built around 1949-50 and features a Coprion bell. This trumpet has fairly extensive lacquer wear, but between the aged...

MSRP:
Now: $649.99
Was:
This is an awesome vintage trumpet! There are some signs of usage of course from a horn with this vintage. and a very small spot of redrot on the leapipe (also very early signs). There is some...

MSRP:
Now: $3,499.99
Was:
The Martin Handcraft Committee model was the design that came between the Handcraft Imperial (an underrated horn in the Martin lineup) and Committee. It was designed by a "committee" of trumpet...

MSRP:
Now: $375.00
Was:
This is the "1946" design version of the King Liberty trumpet, and this horn in particular was made around 1947-48. Condition is quite good overall (see note below about valves), although there has...