It's been a very busy year here at ACB but now that the shop is totally in a good "groove" I am finally ready to open the studio for improvisation and trumpet students.

Interested in having Trent present a workshop, masterclass, recital, or concert at your venue? Please contact his booking agency DGL  Artists. 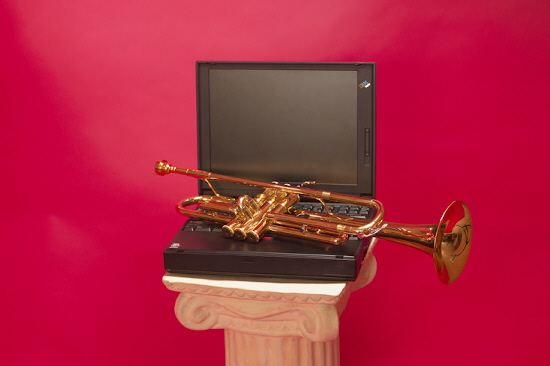 Primary days are Monday-Wednesday for teaching although the schedule is fairly flexible.

Friendly rates and flexible scheduling to fit your needs. Send us a note  HERE

Celebrated trumpet artist, educator/clinician and entrepreneur, Trent Austin is a trumpeting Renaissance Man. His brilliant performances and recordings in both the jazz and classical music worlds, as well as packed-house Master Classes have garnered him rave reviews, awards and International acclaim.

A prodigy, in high school Austin performed at the opening of Euro-Disney and also was a featured performer at the 1992 Montreux Jazz Festival. He was selected first trumpet of the Maine All-State Music Festival and was awarded a full music scholarship to the University of New Hampshire to study classical trumpet. Austin’s other early career awards include being named to the prestigious Berklee Grammy® High School Jazz Band in 1993 and designated lead trumpet of the 1995 Disney All-American Show Band.  He was also a featured soloist at the 1996 Harmony Ridge Brass Festival and at the 1997 Lake Placid Institute of the Arts Seminar.

Trent has studied jazz improvisation privately with greats Jerry Bergonzi, Kenny Werner, Chuck Findley and engaged in extensive studies with Hal Crook and Charlie Banacos. His primary classical instructors include studies with Robert Stibler of the University of New Hampshire and with Edward Carroll, formerly musical director of the New York Trumpet Ensemble.

Fiercely dedicated to the cause and development of music and jazz education, Trent was a trumpet professor  at the University of Southern Maine for 9 years and regularly provides clinics and Master Classes nationwide at various trumpet and brass conferences, including at the International Trumpet Guild Conference and other trumpet/brass conferences. Austin also maintains an active teaching studio in Kansas City  and worldwide online via Skype, providing trumpet and jazz improvisation lessons.