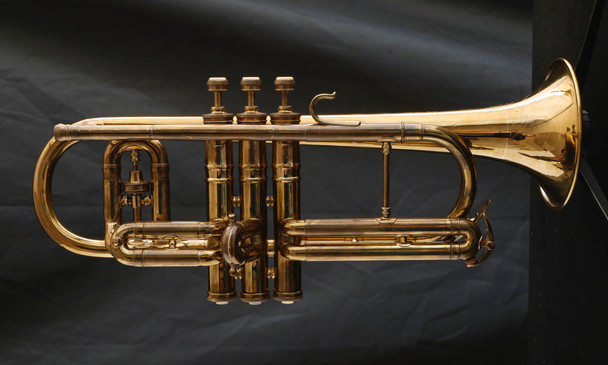 Conn had many wonderful instrument designs, including the 38A! The wrap of this horn is similar to the 80A, although the 38A has a full loop under the opera glass mechanism that slightly shortens the apparent overall length of the horn. This is a pre-owned horn with some dents and patches. There is a long patch on the leadpipe and one on the first valve slide knuckle (the protective patch on the second valve slide is factory standard). There's a larger dent on the bell near the first valve, and it looks like much of the bell has been worked. There's a small dent in the tuning slide and a small dent on the underside of the bell tail area. It has beautiful dark vintage lacquer. Perfect compression through the leadpipe and tuning slide, some compression loss through the valves. The horn will play best with a thicker oil like Berp #3. Please see the photos for the condition of the horn.

From the fabulous Conn Loyalist:

The new 38A Victor cornet was developed to meet the insistent demand for a cornet similar to the famous 80A Victor but in smaller bore. Soloists especially demanded a cornet which would make their work easier in the upper register. To make a cornet in small bore with both a good upper register and also a good lower register presented a most difficult task. But Conn engineers, after nearly two years of experimenting, have produced just such a cornet. The angle of taper in the bore of this cornet is greater than in any other Conn cornet. It widens from a small mouthpipe to an unusually large throated bell. This design gives a very flexible scale and a rich, mellow tone. The upper register is true and pure, while the lower notes are solid and full. This is unusual in a small bore cornet, for generally if the upper register is good the lower register is windy, colorless and hard to get. Although free blowing, it has proper resistance which gives the player just the "feel" he wants. Being in small bore, the stroke of the pistons is shortened, giving a short, fast action. Some of the finest cornet soloists in America helped us develop this model and their tests of the final model are enthusiastic in its praise. One of the first to purchase was the famous Ernest Williams, Ernest Williams School of Music. Key of Bb and A. Tuning wheel. Clickless Crysteel valves. Finger hook.

Sold with no case or mouthpiece.

Also note weight indicated in the ad is shipping weight not actual weight of instrument.

1954 Conn 80A cornet in Lacquer with Nickel slides!

MSRP: $479.99
Now: $379.99
Was:
This horn is in lacquer, and it features nickel slides!   The 80A is an awesome cornet, and is popular with trad jazz players. It has decent compression with thicker valve oil. There are some...

MSRP:
Now: $749.99
Was:
The Conn 40A long model cornet has an artistic, Art Deco design concept. Every part of the horn incorporates Art Deco details, from the mouthpiece receiver to the rimless bell. One key difference...

Superb deal on a 1952 Conn 80A Victor Long Model Cornet in Lacquer!

MSRP:
Now: $699.99
Was:
This is a wonderful vintage cornet from Conn! All slides and valves move freely, and compression is quite good with a heavier oil. It has no major dents, and only a few very minor dings (they wont...

MSRP:
Now: $379.99
Was:
Pre-Owned Conn 80A Victor Long Cornet with nickel slides   Features: - dual bore main tuning slide - 80A leadpipe widens over a shorter distance than the model 8A leadpipe -...

MSRP:
Now: $849.99
Was:
Here's a King SilverSonic cornet from the late 1960s with the iconic "underslung" wrap design and a Sterling silver bell! This cornet has some signs of use, with a couple little pings on the leadpipe...

MSRP:
Now: $479.99
Was:
Here's a King Master cornet from the early 1940's with the innovative "underslung" wrap design! We've had a little work done on the mouthpiece receiver and some bell dents removed. There's a dent on...

MSRP:
Now: $499.99
Was:
Vintage 1938 Conn Victor Long Cornet If you've been wanting to start or expand your vintage horn collection, take a look at this Conn 8A! It's a slim wrap cornet with Conn's famous "opera glass"...

MSRP:
Now: $549.99
Was:
Here's a starter option if you're looking for an American made shepherd's crook cornet, the D.E.G. Signature 2000 cornet in lacquer! All valves and slides are fast and smooth. There are a couple...