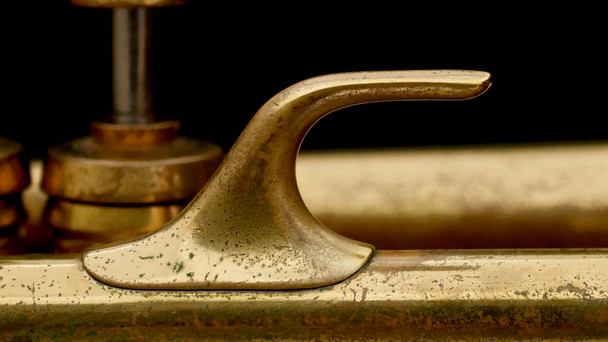 The Conn 40A long model cornet has an artistic, Art Deco design concept. Every part of the horn incorporates Art Deco details, from the mouthpiece receiver to the rimless bell. One key difference between the 40A and most modern instruments is the tubing wrap; the third valve slide is on the right of the tuning slide rather than on the left. The design concept continues through the recessed water keys, faceted valve casings, bracing, and valves caps. But ultimately, it's the rimless edge that steals the show!

This cornet was made in 1935 and has a few signs of use. There are some dents and dings around the instrument, with a couple on the inner bend of the tuning slide, the knuckles where the third valve slide joins the valve block, the second valve slide crook, the third valve slide crook, and several along the length of the bell. The rim of the bell has some bending, and the throat is slightly compressed. There is some lacquer wear throughout the instrument, with more at the contact points.

All slides and valves move freely. The valves are bottom spring style valves.

Here's a video of another 40A from around the same manufacturing date:

From the Conn Loyalist site:

This is the cornet version of the 40B Connqueror Vocabell trumpet. There are several differences between the 40A and 40B. The 40A is, of course, a cornet and as such it takes a cornet mouthpiece. It also means that the internal bore is different, more conical. There are a few ways to tell a 40A from a 40B without inserting a mouthpiece to see if it fits. The 40B trumpet has a third slide finger ring, below the third slide. The 40A doesn't have a fingerring at all on the third slide. Also, the mouthpiece receiver of the 40A comes out to the bell curve. The mouthpiece receiver on the 40B comes out about an inch beyond the bell curve. The overall length of the 40B is also more than the 40A, but this might be a bit hard to see without comparing the two side by side.

Although built in medium bore, this cornet has all the power and breadth of tone found in a larger bore because of the Vocabell. This new principle bell vibrates freely and and in sympathy with the vibrating column of air in the instrument and consequently the tone is purer, clearer and easier to produce than the tone in an instrument with the conventional bell. Delicate broadcasting instruments in the Columbia Broadcasting System Studios show the Vocabell to be superior in all respects to the instrument with the conventional bell with a wire in the rim. The volume is from 12 to 15 decibels greater, the scale is smoother and more even throughout and the tone is clearer and purer. Used by B.A. Rolfe, great cornet virtuoso and radio impressario, and other national stars. Masterpiece, both musically and in modern appearance. Bb and A, springs in bottom of valves.

No mouthpiece included. No case included unless chosen from the options above (additional charges apply based on the options you choose).

MSRP:
Now: $64.95
Was:
We are delighted to have these in stock! These are awesome cup mutes that already have a dedicated following!

MSRP:
Now: $120.00
Was:
We're happy to report that we now carry Warburton Woody Mutes! These are the straight mute versions and we offer the full range of wood types.   Crafting North American hardwoods, applying a...

MSRP:
Now: $45.01
Was:
World's Greatest Plunger Mute?   This mute is quickly becoming a customer favorite here at ACB! The Hirschman Mutes "KR Indigo" Plunger Mute is the culmination of a decades-long quest for the...

MSRP: $229.99
Now: $159.99
Was:
New for 2021, this lightweight ACB Slimline professional trumpet case features a semi-rigid outer shell and a durable nylon covering. The adjustable interior pads allow you to fit the case to your...

MSRP:
Now: $599.99
Was:
Here's a cool version of the Conn Perfected Conn-queror cornet! This one has a large bore (we measured it at .464") which, based on the the info from Conn Loyalist below, is a less typical size for...

MSRP:
Now: $849.99
Was:
Here's a King SilverSonic cornet from the late 1960s with the iconic "underslung" wrap design and a Sterling silver bell! This cornet has some signs of use, with a couple little pings on the leadpipe...

MSRP:
Now: $999.99
Was:
Here's a vintage New York Bach American-style straight bell cornet from the late 1940s! There are a few issues to address with a competent restorer to get this horn playing at its best (contact us...

MSRP:
Now: $375.00
Was:
This is the "1946" design version of the King Liberty trumpet, and this horn in particular was made around 1947-48. Condition is quite good overall (see note below about valves), although there has...