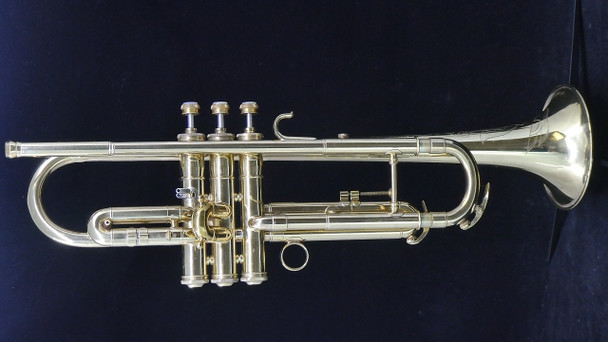 This Conn 2B New World Symphony trumpet is a great option if you're looking for a good vintage horn. The valve compression is very good and all valves and slides move freely. The 2B has an underslung 3rd valve slide ring and a first valve trigger (the trigger is missing on this particular instrument). Third valve and first valve slide stop rods both have nuts and are well aligned. There is some lacquer wear at the contact points. There are a couple dents and dings, most notably on the bell bow (see photos). A small crease has been rolled out of the bell flare.

Two features standout with this trumpet: the first slide trigger, and the underslung third slide ring. It differs from the previous model 2B in both respects. At first glance you might be tempted to think the third slide is inserted upside down, but it isn't as can be seen by the position of the spit valve. The 1941 catalog suggests this 2B is the a modernized, reinstated version of the previous 2B. I can't really judge whether that is the case or not, but this new 2B looks very much like the 8B Symphony Grand, which was discontinued in 1940, the first year of this 2B. Calling it "2B" and saying it is the old 2B reinstated might have been a marketing ploy. Then again, maybe not. Contrary to what the original model number list indicated, the 1941 catalog calls this 2B "New World Symphony", just like the old 2B. It had a #1½ bore (0.458"), although in an interesting quirk, the first valve slide is a 0.480" bore, a feature it shares with the 8B Symphony Grand (reinforcing the case for it belonging in the 8B family) and 28B Connstellation. The 2B New World Symphony was produced between 1940 and 1951.

On 3 January 2004 I had the opportunity to play a 2B (New World) Symphony. This instrument was in immaculate condition and included all the parts that get lost first. The upside-down third slide does take some getting used to. Really, you must hold the instrument differently, gripping the valve casing at the bottom. To play I thought it felt very similar to my 1948 22B New York Symphony, if perhaps not quite as bright. To me the 1½ (0.458") bore (which is somewhat larger than the 22B's #1 bore) doesn't make it more free blowing the 22B is, I felt no difference in that respect. However you can "feel" the larger bore. Perhaps the somewhat larger bore is also what makes it not quite as bright as the 22B New York Symphony. And it probably takes a little more air. Overall a very interesting instrument.

What Conn said in 1941:
The 2-B New World Symphony Model has been reinstated in the line by popular request. Ever since it was discontinued several years ago, there has been a constant clamor for it. Now the 2-B is back, but it has been modernized mechanically. It now has the famous Clickless Crysteel valves and an improved trigger on the first valve. It still has its wonderful one-piece bell, which is largely responsible for its great power and brilliance. It is still made in medium-large bore, which is the bore so many symphony men and dance men in the larger orchestras prefer. Great trumpeters everywhere will welcome back this great instrument, and those who did not know it in the old days will find a great thrill when they play it. Built in Bb and A.

What Conn said in 1950:
Two of the most famous trumpets of all time are the 2B in medium bore and the 22B in medium small bore. The 2B has a trigger, one-piece bell and is tops where big, powerful trumpet tone is essential. Both in Bb and A.

Sold with no case or mouthpiece

MSRP:
Now: $329.00
Was:
Check out this vintage Holton 45! Despite some signs of heavy use, it's a fun little horn that plays nicely. The valves should be rebuilt for best performance, as compression is low even with a heavy...

MSRP:
Now: $1,699.99
Was:
A Great Vintage Martin Trumpet The Martin Handcraft Imperial is my absolute favorite vintage instrument! This horn is all original, although some work has been done on the front brace and...

MSRP:
Now: $649.99
Was:
This is an awesome vintage trumpet! There are some signs of usage of course from a horn with this vintage. and a very small spot of redrot on the leapipe (also very early signs). There is some...

MSRP:
Now: $799.99
Was:
Here's another Conn trumpet we have in the shop, the 12B! This trumpet was built around 1949-50 and features a Coprion bell. This trumpet has fairly extensive lacquer wear, but between the aged...

MSRP:
Now: $1,199.99
Was:
Here's a nice-playing Conn 60B in silver plate! Made in Elkhart, Indiana in 1969, shortly before production moved to Abilene, Texas. There are a few spots of wear and repair. There's a small dent in...

MSRP:
Now: $549.99
Was:
I always have these in stock and right now have a great 1923 Holton Revelation with nickel silver balusters in raw brass! (see pics).   I have had many of these in stock (I always...

MSRP:
Now: $329.00
Was:
Check out this vintage Holton 45! Despite some signs of heavy use, it's a fun little horn that plays nicely. The valves should be rebuilt for best performance, as compression is low even with a heavy...