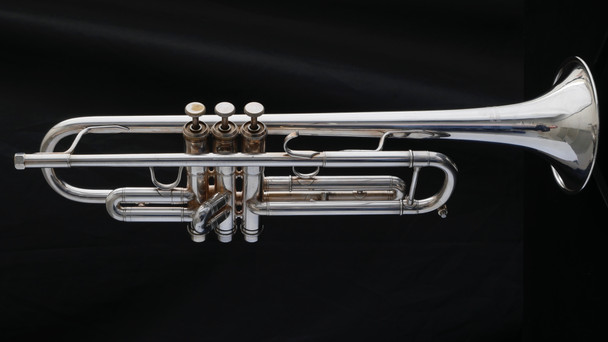 This French Besson trumpets made by Kanstul is very much a traditional professional trumpet. The bell has a beautiful taper reminiscent of a cross between a Besson bell and a Bach 37 bell. These horns have great intonation, especially around the top of the staff. It has a Benge ML Plus feel to the blow.

This is a pre-owned horn with some signs of use and repair. There are some spots of redrot developing along the underside of the leadpipe. The second valve slide pull knob is missing, and the crook has a couple pings. There's a dent on the third valve slide crook, and the stop screw is missing. There are small dents on a couple of the knuckle joints. There are some small pings on the bell tail and bell bend. There has been significant dent work done along the length of the bell. The bell flare has had some dents removed, and there's heavy scratching on the inner bell. There's some wear and pitting on the finger buttons (especially the first) and a small tool mark on the first valve top cap. The valves have some wear and will benefit from a thicker oil for vintage instruments.

The Besson Brevete was a very popular choice for generations of Jazz trumpeters, and was played at various times by artists like Miles Davis, Rafael Mendez (the Olds Mendez was basically a copy of his old Brevete), Lee Morgan, and Fats Navarro.

The Besson Meha was also a very popular choice, being a brighter horn more suitable for lead and big band playing, played by the famous Conrad Gozzo and others.

These original French Besson trumpets are now collectors items, and command high prices. Unfortunately they were out of production for decades until….

For some unknown reason the owners of the French Besson trademark decided to make a new line of trumpet in the early 1980s. Fortunately they choose top US maker Kanstul to design and produce the line, and Kanstul faithfully recreated the original horns, and many new models too. The Besson Meha and Brevete lived again (These Kanstul made horns are beautifully made and play as well as the originals, without all the issues of 50+ year old instruments.

From the early 1980s till about 1998 all French Besson trumpets were made by Kanstul, and some other Besson models also.

Sometime around 1998 Kanstul lost or decided not to renew the contract to make some Besson instruments, and the 609 and related lines were terminated. Boosey and Hawkes became part of The Music Group and was then sold to Buffet Crampon, and Kanstul still makes the Stamm and Classic models for Buffet Crampon. There are still French Besson Meha and Brevete trumpets available new, with some called the “New Generation” model. From what I have heard these are Kanstul made but are old stock, as for some unknown reason a lot of these were stockpiled in warehouses and not distributed at the time of production.

MSRP:
Now: $900.00
Was:
As I was sitting in my home studio over the weekend I looked over to my instrument collection and wondered why I needed so many! :-) I have been extremely fortunate to be following my house rule of...

This horn has sold, but we can help you order your own dream horn from Adams. Give us a call at (816) 410-0826 or email info@austincustombrass.com and we can start the process with you! Completely...

Pre-Owned 1976 Selmer Radial 99 Trumpet in Raw Brass with the coolest valve design ever!