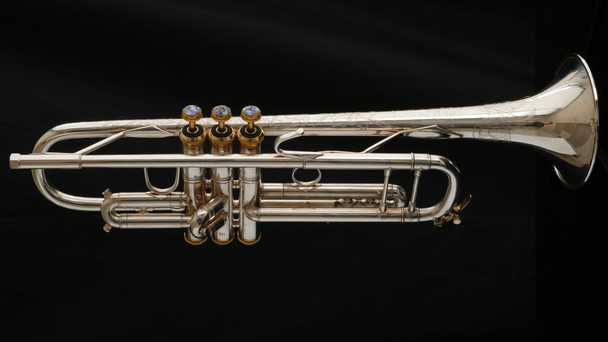 Rare Bach alert! They only made two thousand of this limited edition Stradivarius 198 trumpet with the #6 bell and leadpipe. The sound is brighter than the "standard" 37 bell 25 leadpipe setup, but the gold brass bell keeps it from getting too edgy. With a lightweight body and bell and ML valve block, this is a responsive horn with a bit more resistance and efficiency. Compression is excellent. There are a couple dings in the bell flare, some scratching on the bell bend, a dent on the side of the bell, a slight bend in the bell at the back brace, a small dent in the second valve slide crook at the pull knob, a ding on the third valve slide crook, and a small ding in the tuning slide crook. There's also some stand scratching in the gold plate of the inner bell. We've priced it to reflect these flaws, and to give you a fantastic deal on a rare Bach Stradivarius trumpet model!

The limited edition Vintage Bach Stradivarius Model 6 trumpet actually dates back to the first quarter of the 20th century. During his lifetime, the noted musician and engineer Vincent Bach (1890-1976) researched and developed countless instrument designs. After much experimentation he built his first trumpet in 1924. While today the Bach model 180S37, based on the #37 bell flare and #25 lead pipe, stands as the world’s most popular trumpet, such was not the case during Vincent’s lifetime. In the period 1927-1930 Bach trumpets based on a #6 bell flare and #6 leadpipe were all the rage. Famous musicians such as Harry Glantz, George Mager, F.E. Olds, Elden Benge, and mouthpiece maker Frank Zottola at one time owned one of these Bach models.

The Selmer Company pays tribute to this popular model by using it as the basis for its limited edition Vintage Bach Stradivarius trumpet. In recreating the 1930’s look, the Vintage will incorporate hex-style slide pull knobs and wider bracing than found on today’s standard models. A longer mouthpiece receiver embraces the Bach Mt. Vernon look. A handsome silver-plated finish with gold-plated trim and distinctive engraving will protect and adorn the instrument. Like all Bach Stradivarius trumpets the Vintage will feature on-piece bell construction. Hand hammering converts sheets of special brass into trumpet bells. Several times throughout the manufacturing process the bells are annealed in high temperature ovens to soften the metal and relieve stress. During the spinning state a piece of wire is place din to the bell rim. Lead soldering of the bell rim wire adds clarity to and solidifies the sound.

Although a #6 bell might sound slightly brighter than a #37 due to the shape of the flare, use of a gold brass bell in the Vintage eliminates that edge. Gold brass contains a higher copper content than standard yellow brass, making the bell softer and dampening vibrations for a warmer tone quality. Based on the popular .459″ medium-large bore, the Vintage will be comfortable to play and focus. Incorporation the #6 lead pipe, which generally feels slightly more restrictive than the standard #25 lead pipe that most of today’s musicians are used to, recreates the sound and feel of a popular 1930-era Bach trumpet. Utilizing a lightweight body and bell enhances the instrument’s quick response.

Only 2,000 of this limited edition Bach trumpet (model number 198) will be built.

Comes with a Bach hard shell case. No mouthpiece included.

MSRP: $899.99
Now: $684.99
Was:
Austin Custom Brass "Doubler's" Flugelhorn: Our #1 selling instrument! Order today or email us to get on the first pre-orders for the next batch Ever wished you had a flugelhorn, but...

MSRP: $26.95
Now: $15.00
Was:
Top Cleaning Brushes!   The H.W. Trumpet Brass Saver Brush Pack includes  a lead pipe pull-thru brush and a valve/tubing brush. Won't scratch or damage and will not get stuck. Use wet or...

MSRP:
Now: $135.00
Was:
My #1 selling mouthpiece at ACB! I have often wondered why you see the eBay auctions of Bach Mount Vernon 3C mouthpieces routinely sell for $400 or more. Is there something special and different...

MSRP: $250.00
Now: $200.00
Was:
Introducing Glantz: ACB's take on the classic Harry Glantz mouthpiece!   For years and years one of the things I've always wanted to do here at ACB is to re-launch classic trumpet...

MSRP:
Now: $22.75 - $29.07
Was:
We're proud to offer Leather Specialities Co. accessories from ACB! These valve guards fit a wide variety of trumpets and keep your finish pristine even from acidic hands. Made of the finest quality...

MSRP:
Now: $5,400.00
Was:
Orchestral Rotary Bundle! Get everything you need to be ready for rotary trumpet playing at the highest levels! Includes the following: Schagerl Berlin C trumpet (your choice of options, klappen,...

MSRP:
Now: $750.00
Was:
I absolutely LOVE this microphone! I had one from the first generation, and this second generation version is even better. It has more gain, and it's incredibly clean. Michael Barkley is a trumpeter...

MSRP: $251.98
Now: $164.98
Was:
There's a huge variety of trumpet mutes on the market, but you'll find these three in just about every serious player's mute bag. This bundle will have you covered for most section playing...

MSRP: $2,999.99
Now: $1,479.99
Was:
Please view all photos Here's the perfect horn for an advancing student or a comeback player with a budget, a Bach Stradivarius 37 in silver plate! Great option if you're looking for a Bach...

MSRP:
Now: $679.99
Was:
Here's a UMI Benge 3X in silver plate! This is a pre-owned trumpet with some wear. There are several dents along the bell. One of the pull knobs has come off of the second valve slide. There's some...

MSRP: $3,575.00
Now: $2,699.99
Was:
Here's a Schilke Handcraft HC2 trumpet in excellent condition! The HC2 is Schilke's take on the classic Martin Committee trumpet (Renold Schilke was the lead designer of the "committee" project)...

MSRP:
Now: $1,399.99
Was:
This is an Olds Recording trumpet made in Fullerton, California in the mid 1970s. It has an ergonomic valve block with the offset second valve, and it's a "balanced" horn with the valve block set...