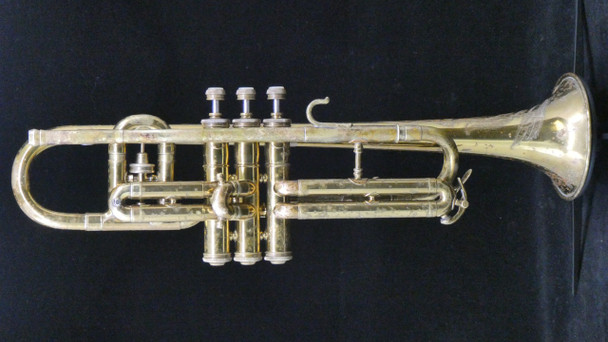 If you've been wanting to start or expand your vintage horn collection, take a look at this Conn 8A! It's a slim wrap cornet with Conn's famous "opera glass" tuning mechanism and a reverse wrap tuning slide. The tuning slide also has a quick-change stop rod for moving from Bb to A tuning (missing nut). These Conn cornets are especially popular for trad jazz playing.

A couple things to note with this horn. The leadpipe has some waviness and we've had a crease removed near the receiver (also a small hole has been patched). There has been some repair work done on the bell bend. There's some lacquer wear throughout the horn (see photos). There are some dents around the tuning slide and on some of the knuckle joints. The opera glass tuning mechanism works great! Opera glass slide has a couple small dents. Valve plating is in good condition overall but there is some wear (see photos). All valves and slides move freely. The second valve slide also has a patch over a tiny hole. This horn will play best with a thicker oil meant for vintage horns; we like Berp #3.

What Conn said in 1933:
Here we have the famous Conn Victor cornet with slender, racy lines of the trumpet. The same easy blowing, amazingly accurate scale, glorious tone, patented tuning wheel, but in slightly smaller bore and styled for the modern player in the modern manner. Note the trim streamlines, the beautiful balance and symmetry, the smart, sporty appearance of this new Victor. Bb and A, springs in bottom of valves.

What Conn said in 1938:
In the 8A we have the famous Victor cornet with the slender, racy lines of the trumpet. The same easy blowing, amazingly accurate scale, glorious tone, patented tuning wheel, but in slightly smaller bore and styled for the modern player in the modern manner. Note the trim streamlines, smart, sporty appearance of this new Victor. Long a favorite with leading dance and radio stars, the new 1938 model has improvements in response and intonation which make it even more popular. Ni increase in price. Bb, A, Clickless Crysteel valves.

No case or mouthpiece included with this horn.

Horn sold "as is" with no option of return.

Also note weight indicated in the ad is shipping weight not actual weight of instrument.

MSRP:
Now: $155.00
Was:
The Trent Austin Signature Mouthpiece From Austin Custom Brass Now you can play on the same model mouthpiece that I perform on regularly! The TA1 is a mouthpiece that I created to be my own “daily...

MSRP: $24.95
Now: $19.95
Was:
High Speed Valve Springs for Trumpet! Speed up the performance for your instrument! It doesn't matter how much you practice, your valve up-strokes will never get faster than your springs. Improved...

MSRP: $39.99
Now: $29.99
Was:
One of the most popular brands for a reason - very stable, easily transportable, and safe with almost all horns. The 5 leg version offers more support and stability than the 3 leg version, we use it...

MSRP:
Now: $1,047.99 - $1,147.99
Was:
All you need to get started with the piccolo trumpet! This bundle includes an incredible value with the following: ACB Doubler's Piccolo Trumpet (your choice of finish) ACB 7PT Piccolo Trumpet...

MSRP:
Now: $379.99
Was:
Pre-Owned Conn 80A Victor Long Cornet with nickel slides   Features: - dual bore main tuning slide - 80A leadpipe widens over a shorter distance than the model 8A leadpipe -...

MSRP:
Now: $249.99
Was:
Here's a King Master cornet from the around 1939-40 with the innovative "underslung" wrap design! This cornet has some signs of use: there is some lacquer wear in several places, as well as several...